From the shores of Lake Garda comes Chiaretto, a rosé in a lighter shade of pale

There’s a revolution happening on the shores of Lake Garda, and its foot soldiers are all in ballerina pink. They’re amassing for a rosé revolution in Italy’s largest appellation for rosé wine, and they’re now 10-million strong and growing. The rosé is called Chiaretto di Bardolino (chiaro means light colored), and ground zero for this revolution is the town of Bardolino on Lake Garda’s eastern shore.

The Bardolino wine zone lies just five miles west of Valpolicella—Amarone country, one of the biggest powerhouse reds you could imagine. How is it possible that something so delicate and lithe could be made so near? And using the same grapes, no less? (Mostly corvina and rondinella.)

As is often the case in Italy, terroir trumps grapes. Lake Garda is one of five lakes that hang like crystal pendants from the Alps—Maggiore, Lugano, Como, Iseo, and Garda. Each was formed by alpine glaciers that came and went, pushing and carving soils like so many bulldozers. Four glaciers took stones from the Alps and dumped them at the bulbous southern end of Lake Garda, where the climate is more Mediterranean than alpine—warm enough for olives, lemon trees, grape vines, and touristic water parks, which draw 12 million visitors a year—whereas the lake’s northern, fjord-like end has a chill more suited to the pines and chestnuts of the lower Alps. In short: Chiaretto has the benefit of morainic alpine soil in a Mediterranean climate.

Then there’s the lake’s ceaseless winds. A delight to windsurfers, these are charted in navigational maps crisscrossed with arrows. Viticulturally, they keep the grapes healthy and free of mold, and create a night-time drop in temperature that results in good acidity. Bingo: an ideal microclimate for zippy, refreshing rosé.

The ancient Romans had a hand in it, too. When making wine for their troops in northern Italy and France, they used a torchio, or screw press. There being no maceration—that is, extended contact of juice with grape skins, wherein comes the color—“all their wines were pink,” explains Angelo Peretti, director of the Consortium for Chiaretto and Bardolino Wine. “Here they didn’t know reds. In the south, they did, because they used the palmento method, of Greek origin. The ancient palmentos used stone vats to make maceration after pressing,” he says. “So you can understand why the main regions for rosé in Italy and France were Roman areas.”

Jump to the 19th century, and the rosé tradition continued. “The most interesting document dealing with Chiaretto is the Italian vocabulary of the Crusca Academy,” Peretti relates. “In 1804, there was an edition printed in Verona, in which they inserted about a thousand words coming from the territory of Verona. We find the word chiaretto there.”

The first Chiaretto winemaker we know by name is Pompeo Molmenti, a lawyer and writer who had a vineyard on Lake Garda. In his travels to Provence, he’d developed a taste for their style of rosé—pale, dry, and aromatic—so when he produced his first rosé in 1896, that was his model. Following the lead of Provence winemakers, he eschewed saignée, a method that rosé fans consider inferior, being a byproduct of red-wine production: In an early stage of fermentation, some grape must is drained from the tanks (saignéemeans‘bleeding’ in French) to create a more concentrated red wine. This drainage is fermented separately, making a rosé.

Rosé advocates endorse another philosophy: From vineyard to cellar, everything must be calculated to produce the best pink wine possible: where you plant, how you prune, when you harvest, what kind of yields. The rosé is not a byproduct, but an end in itself. This, it could be said, was the first rosé revolution on Lake Garda.

The second revolution began in 2008, when the Bardolino consortium hired journalist Angelo Peretti to come up with a game plan for the whole appellation, which subsumes Chiaretto and Bardolino. Sales had been suffering for Bardolino’s namesake red wine, its reputation tarnished by cheap, undistinguished, industrial versions. (Created as a DOC appellation in 1968, Bardolino is an easy-drinking red made from corvina, rondinella, and other local varieties. The best are delightful, with juicy red-berry fruit and pretty aromatics—perfect for lakeside quaffing and summer dining.)

Based on his research, Peretti made some radical recommendations. First, prioritize the rosé. “I told the consortium, ‘We will invest in Chiaretto.’ They looked at me and asked, ‘Chiaretto! Are you sure? They didn’t believe in Chiaretto.” But their rosé was a blank slate in the wider wine world, with no bad reputation to overcome. And Peretti’s plan showed foresight; over the past five years, rosé has enjoyed a sales boom, particularly in the U.S., and Chiaretto has caught that wave.

Over the past five years, rosé has enjoyed a sales boom and Chiaretto has caught that wave.

“Chiaretto is selling because it’s pink,” says Matilde Poggi, owner of the highly regarded La Fraghe winery. “People don’t care about the appellation when they buy rosé. Now our rosé is doing well not because it’s Chiaretto, but because it’s rosé.” Starting two years ago, she upped her rosé production to equal that of Bardolino, once her flagship.

Another key message of Peretti’s proposal was a call for consistency, starting with Chiaretto’s color—the hallmark of any rosé. Corvina and rondinella are low in anthocyanins and thus will never make dark, inky red wines. As rosés, however, they’d been a range of colors, from watermelon to salmon to powder-puff pink. Acidity, dryness, and other technical aspects varied as well, leaving consumers confused. “I saw, especially in the U.S., that when people saw a darker color, they thought it was sweet,” notes Poggi, who has always made her wines dry, but started making Chiaretto in a paler shade in 2000.

Winemakers as a whole fell in line with the 2014 vintage, adopting Peretti’s plan. Chiarettos on the market today are pale pink and dry. They typically offer bright acidity, citrus and wild-berry aromas, some floral or herbaceous notes, and occasionally a trace of minerality that’s so typical of alpine wines. (Remember the glaciers.)

Bardolino’s makeover has meant an overhaul in viticulture as well, with separate vineyards dedicated to pink and red. “If you aim to produce a good Chiaretto according to the new disciplinario,” says Peretti, referring to the newly created, autonomous Chiaretto di Bardolino DOC, “you have to grow it in a very different way from the vineyards for Bardolino. Otherwise, you won’t have the right acidity, the right pH, the right sugar level, and so on. And by dividing Chiaretto from Bardolino, nobody will use the saignée method again.”

The other half of Peretti’s plan pertained to the appellation’s reds. He called for the resurrection of Bardolino’s three historic subzones: La Rocca, Montebaldo, and Sommacampagna. Wines labeled as such would meet stricter quality controls and emphasize terroir—much like Beaujolais Cru, a key reference point.

The number of wineries importing Chiaretto has quadrupled over the past four years, to about 25. More are looking to do business here. When rosé season rolls around, give a try to whichever Chiaretto lands in your shop. But keep a lookout for these wineries, among my favorites:

Villabella: This is the Chiaretto that first put Lake Garda rosé on my radar. The palest on the market, Villabella’s Chiaretto is nicely aromatic—think wild berry and mandarine zest—with a touch of residual sugar, which manifests as ripe, succulent peach flavors. Villabella is the largest Chiaretto producer, making 95,000 bottles under two labels, Villabella and Villa Cordevigo, an organic single-vineyard rosé that comes from their gorgeous 18th century estate (its villa and gardens are a popular wedding spot). Co-owner Franco Cristoforetti is president of the Bardolino Consortium, so he’s fully invested in the region’s makeover.

Le Fraghe: The name of the old farmstead that Matilde Poggi inherited, Le Fraghe, means ‘strawberries’ in local dialect. Five years after turning her vineyards organic, she found out why: Wild strawberries spontaneously appeared. Clearly, fruit loves this place. “Corvina grows well here,” Poggi says, which is evident across her full range of wines. She’s also a rondinella whisperer, the only winemaker to make a 100 percent version of this spicy, light-colored grape. Combine the two, and you’ve got terrific synergy. Her Chiaretto Ròdon offers a noseful of wild rose and strawberry, appealing savory flavors, and a touch of salinity on the finish.

Albino Piona: Another trustworthy name is Albino Piona. Founded in 1893 by its namesake, the winery is now fourth generation, run by four siblings. “We’ve made Chiaretto from the start, and always a pale version,” says wine director Silvio Piono. They follow the commonly used ratio of 80/20 corvina/rondinella, harvesting the grapes a good 10 days earlier than those destined for Bardolino, thereby capturing a tangy acidity. In a cool vintage like 2017, Chiaretto is particularly “fresh and crunchy,” says Piona, and theirs shows good concentration and appealing floral and cherry/berry aromas.

If you ever visit Lake Garda—or Verona or Venice, for that matter—chase down a sparkling Chiaretto. A number of producers make small quantities, but none is exported to the U.S. (Prosecco’s low price makes it difficult to compete in the sparkling niche.) But boy, are they delicious! Chiaretto’s red fruit, floral, and citrus notes get the perfect lift from bubbles. My favorites come from Poggio delle Grazie (above) and Tenuta la Presa. Poggio delle Grazie makes two: one fermented in bottle using dried garganega grapes to kickstart the bubbles, and a Chiaretto Spumante using the Charmat (autoclave) method. Tenuta la Presa’s Qveé Magica is magic indeed, with delicate perlage and bright cherry aromas. Perhaps one day these lovelies will come Stateside. As they say in the New York Lottery: Hey, you never know! 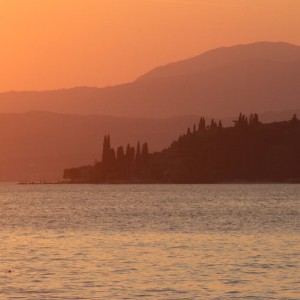 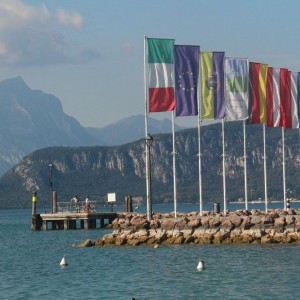